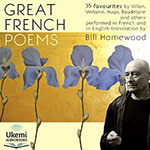 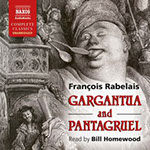 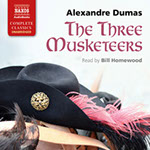 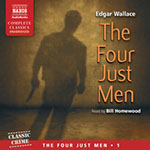 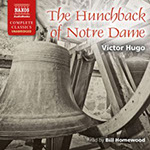 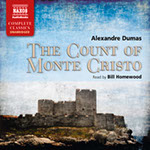 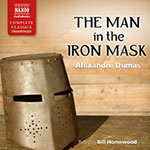 "Beautiful voice, perfect sense, a gravity and a sensibility that releases the inner life of each poem - Bill Homewood is a bit of bi-lingue miracle, and his renditions will be of immense use to all lovers and students of great French poetry."

"Bill Homewood’s Gargantua and Pantagruel is mind blowing. He doesn’t just narrate an entire insane epic he dramatizes it. There really should be an award for these underrated talents."

"Get hold of Dumas’s classic, joyously narrated by Bill Homewood. (His) ebullient and exciting narration, delivered with crisp Gallic exactness that never slows the pace, is a joy."

"...read by Bill Homewood with his customary skill."

"Expertly read by Bill Homewood... Homewood exquisitely captures the wonders and horrors encountered by these Victorian gentlemen on their adventures. His calm, well-paced reading adds a dimension of reality to a tale of natives, murder and rage. Modulations of tone and inflection add to a performance that keeps listeners entranced."

"Why purchase an audiobook adaptation of this thriller when free electronic versions are readily available on the net? The answer is reader Bill Homewood... Homewood not only gives the main protagonists individual presences, but the detectives, government officials, and other supporting characters come alive... This audiobook is likely to gain both Edgar Wallace and Bill Homewood new fans."

"Bill Homewood, a longtime television actor, seems to be having as much fun reading as we are listening."

"A distinguished reading by Bill Homewood. Homewood's rich, eloquent narration fits perfectly with Wallace's tale of post-Victorian intrigue. His dignified delivery of the book's descriptive passages perfectly captures the era's drawing rooms and gentlemen's clubs where stories are shared over brandy and cigars. Homewood does such an entertaining job that the listener can just sit back, relax, and enjoy the fun."

"In this definitive audio edition, narrator Bill Homewood does an outstanding job of gently drawing listeners into the story until only the story exists."

"...an enthralling rendition of a timeless work of literature."

"Those longing for African heat should check out Naxos's recording of King Solomon's Mines. Bill Homewood's ability to summon up the entire cast, from Sir Henry Curtis, Dr Goode and beautiful Foulata to the evil King Twala and the witch Gagool, is magnificent. He gets the clicks, the accents, the rhythm of the prose and the feel of Africa spot on. If you have children of 10+, this is my choice for audiobook of the year."

"IT IS ONE OF MY FAVES OF THE YEAR!!! You did a totally wonderful job...so absolutely exciting...I have been recommending it to all my friends."

"This recording of an 1886 novel is surprisingly fresh. The credit is entirely due to Bill Homewood, whose comfort with the work is evident. The most memorable of his many voices is that of the hideous witch Gagaoola, a Gollum-like character who mutters curses and cackles diabolically."

THE RED AND THE BLACK

"British actor Bill Homewood has a deep, sonorous voice and narrates with almost musical refinement. He is chameleon-like in his versatility with vocal characterisations, easily switching from Julien's timid, earnest voice to the condescending tone of Monsieur de Renal. Homewood is masterful in his narration, capturing all the nuances in the tone and language of Stendhal's writing."

THE HUNCHBACK OF NOTRE DAME

"A voice-a-minute performance that really is a tour de force. Those familiar with the vast scope of Hugo's picaresque canvas will wonder how Bill Homewood can possibly come up with distinctive voices for all the characters. He does, and triumphantly."

"Homewood's voice brings out the essential sensuality and creates an atmosphere where darkness, terror and fear of witchcraft reign."

"Bill Homewood's vibrant performance captures the passion of Hugo's characters in his spell-binding narration. Whether he's thundering Frollo's lust or bellowing Quasimodo's despair, Homewood's strong voice reveals the emotions of the characters with skill and confidence."

THE COUNT OF MONTE CRISTO

"Mr. Homewood is an excellent companion. For me a big part of the enjoyment was listening to the performance – he went all out on it, conveying real emotion and suspense and humor and dread in a magnificent one-man show. He deserves an award. Most actors’ performances are one character in some fraction of a film or play or tv episode between one and three hours; this was 100% of nearly 53 hours, and fantastic."

"Homewood's cultured British voice is suitable for the classic work; he reads with great drama, and his French pronunciation is perfect."

THE MAN IN THE IRON MASK

"Bill's skills include an ability to produce a wide range of voices and characterisations, including a multiplicity of accents. Bill always works extremely quickly and effectively, is capable of making short notice changes in delivery and is always inventive and imaginative in offering alternatives. Bill is therefore a very stimulating person to work with, capable of turning in a first-class performance and meeting deadlines. He has some deliciously quirky voices and is unfailingly flexible and professional."

"It has been a privilege working with Bill on recent projects. The sessions, though highly professional, were nevertheless always pleasant, and imbued with humour, which got our work done."

"Bill is, quite simply, a pleasure to work with; one of the very best in the business."